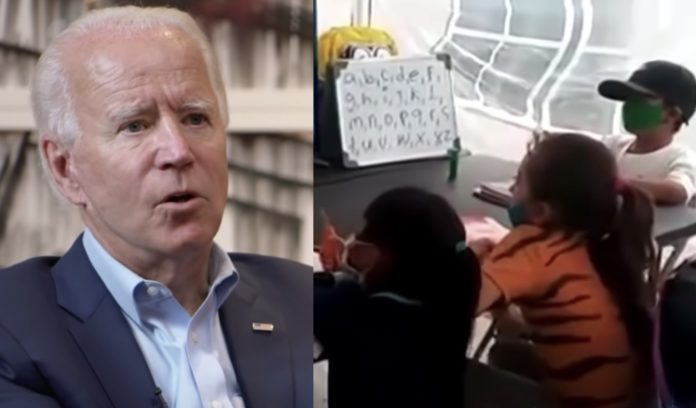 Biden himself accused Trump of suffering from “hysterical xenophobia,” but, in fact, it’s the Biden administration overseeing horrifying conditions for illegal immigrants.

Now the Biden administration is being sued for it.

Two left-wing groups are suing the Biden administration. There are two facilities mentioned in the lawsuit, which includes Fort Bliss and Pecos in Texas.

A 276-page report was filed with the federal government by the National Center for Youth Law and the Center for Human Rights and Constitutional Law.

The suit urges Attorney General Merrick Garland to compel the Department of Health and Human Services to stop abusing and mistreating children at migrant detention centers.

The facilities are described as dilapidated and unsanitary.

Even worse, the attorneys said some workers at the Fort Bliss center made sexual advances on children.

The lawsuit alleges, “Audio provided by whistleblowers appears to confirm that adult staff at Ft. Bliss had been caught in sexually inappropriate situations with minors in their care at least as recently as May 2021.”

“[O]ur legal team has witnessed disturbing conditions that put the health and welfare of these children in harm’s way, including food-related abdominal pain from undercooked and spoiled food, and children being kept in cage-like rooms for most of the day.”

“Filth was commonplace,” the complaint continues. “According to one contractor: ‘I’ve been into one [tent], one time, and I was like, yeah, I’m not going back there. They’re filthy. They’re dirty. There’s food on the floor. There’s wet spots all over the place. The beds are dirty.’”

A 17-year-old Guatemalan girl said: “They did not cook the food well because they were cooking for so many thousands of kids at the emergency shelter … The chicken was raw, everything was raw. I ate it because I had no choice. I got sick from it.”

The lawsuit also referenced an explosive complaint filed last month by two federal whistleblowers who accused the Biden administration of ordering workers to cover up a COVID-19 outbreak among “hundreds of children” at the Fort Bliss facility.

“COVID was widespread among children and eventually spread to many employees,” the complaint alleges. “Hundreds of children contracted COVID in the overcrowded conditions. Adequate masks were not consistently provided to children, nor was their use consistently enforced.”

The whistleblowers said that instead of fixing the problem that exacerbated the infestation, “every effort was made to downplay the degree of COVID infection at the site, and the size of the outbreak was deliberately kept under wraps.”

In his sworn declaration, whistleblower Arthur Pearlstein, an attorney with the Federal Mediation and Conciliation Service, said the Biden administration is covering up the egregious abuse of “thousands of children.”

“Gross mismanagement, waste, and abuse of authority by those at the top who insisted on utmost secrecy led to mistreatment of thousands of children at Fort Bliss,” Pearlstein wrote.