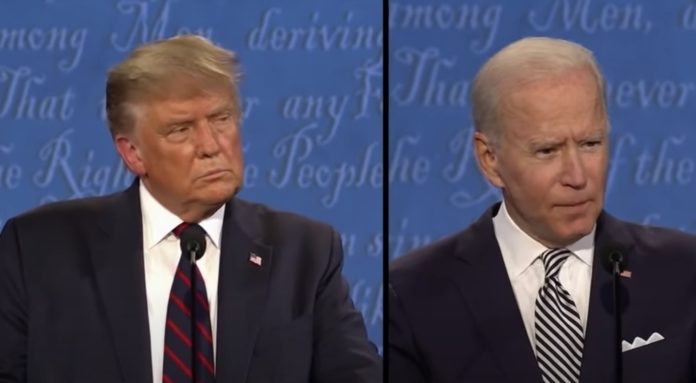 The polls are bad for Biden. Really bad.

Emerson College conducted the poll during and immediately after the final U.S. service members left Afghanistan.

Trump is favored by 47% of respondents while only 46% chose Biden.

Biden’s overall approval rating dropped from 49% in February to 46%.

Against Florida Governor Ron DeSantis, the Emerson Poll shows Biden is stronger with a 48% to 36% edge.

However, the poll indicates that Trump and Biden are the preferred candidates for their respective party in 2024.

67% of Republicans said they would vote for Trump in the GOP primary, the poll shows.

Director of Emerson College Polling, Spencer Kimball, said, “Historically, this data reminds me of 1912 when Teddy Roosevelt failed to win the Republican nomination from then-President Taft and created a third party dooming the Republican chances against Woodrow Wilson.”

Another recent survey found that 69 percent of polled Americans disapprove of Biden’s handling of the U.S.’s military presence in Afghanistan.

NBC News and the Wall Street Journal show only 46% of Independents approve of Biden, which is down from 61% in April. In just over three months, Biden managed to nosedive by 15 percentage points.

A new poll finds the majority of likely voters do not think President Joe Biden will even finish his term.

“This data suggests that Republicans want either Trump or a Trumpian candidate to be their nominee, or half of them may split from the party.”

Among Democrats, 60% said they wanted Biden to be the presidential nominee and 39% said they would rather it be someone else.

The Emerson Poll showed that enthusiasm for next year’s midterm elections was low, with only 69% of Republicans and 71% of Democrats saying they likely will vote.

The poll also found that 68% of respondents said the U.S. lost the war in Afghanistan. Half of the respondents think the U.S. should not recognize the Taliban as the government of Afghanistan, while 21% support the action, and 30% were unsure.

A recent Washington Post-ABC News poll showed 51% of Americans disapproved of Biden’s job amid the swift Taliban takeover and the spread of the COVID-19 delta variant.

The Emerson Poll was conducted August 30 to Sept. 1.