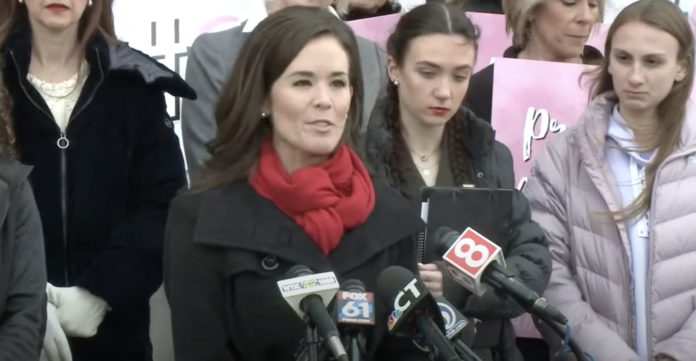 Women’s sports are being robbed by biological males, according to a lawsuit filed against the Connecticut Association of Schools.

The lawsuit represents four female athletes in high school who say the state is violating Title IX by allowing males to take over the sport.

If a male identifies as transgender, then they can compete against females. The lawsuit argues that female athletes have been unable to win races due to an unfair biological advantage.

A cisgender female high school student defeated a transgender athlete in a Connecticut state championship race, just two days after a lawsuit was filed in an effort to block transgender athletes from participating in girls sports in the state. https://t.co/bLXpOVg8Uv pic.twitter.com/vYgsZP1Dfp

“I lost out on qualifying spots for the meets, better placement, and possibly even scholarship opportunities,” Soule said.

“It was a very frustrating and heartbreaking thing to have to go through,” she added.

The federal judge dismissed the case and said that the case did not have any standing, but attorneys representing the athletes were determined to move forward.

ADF Senior Counsel Christiana Kiefer said, “having records that don’t rightly reflect your achievements is a sufficient injury to have Article Three standing in federal court and to keep moving forward.”

Kiefer, representing the athletes, said, “The Biden administration has its head in the sand and is not paying attention to the real world impact of gender identity policies and how devastating they are for female athletes.”

The judge in that Connecticut transgender athlete case needs to go https://t.co/YQX7pfz743 pic.twitter.com/q0vg2FDlVM

Kiefer continued, “I was actually really encouraged by the questions from the bench in court because I think the court understands that records are important, and it’s that is a basis to continue moving forward with the case and allowing us to make our full arguments and focus under Title IX.”

“Each of the athletes has suffered either bumped down in the rankings or denied championship titles,” Kiefer said.

Two biological males, Andraya Yearwood and Terry Miller competed against women in 2017-2018 and were praised. Yearwood and the female athletes have been pushed aside.

Kiefer reported that we reached out to the governments but have been denied. Kiefer said, “They were told multiple times, including by the Title IX coordinator at their schools, that ‘girls have a right to participate, but not to win.'”

“They said that in writing,” Kiefer continued. “Girls have a right to participate but not to win.”

It has been reported that the Biden administration upheld the Supreme Court’s Bostock ruling in 2020 to claim that biological males can compete in women’s sports, regardless of the effect on women.

Again and again in discussing the participation of biological males in women’s sports, mainstream media outlets will claim that proponents of women’s sports are trying to prevent athletes who identify as transgender from participating at all. This is not the case.

Those who believe biological males should have the opportunity to compete in women’s sports after identifying as transgender believe that the female athletes were not at all harmed by having to compete against biological males. Instead, they claim that “cisgender students are not being excluded in any way,” because “they’re allowed to compete in sports consistent with their gender identity.”

The Washington Post cites the Supreme Court’s Bostock ruling in 2020 to claim that the court will uphold the right of biological males to compete in women’s sports, regardless of the harm it does to women.

“The Biden administration specifically takes the Bostock decision and misapplies it,” Kiefer told The Post Millennial. “The Supreme Court was really clear in Bostock that its decision was a limited holding. It arose in the context of federal employment discrimination law. And the Court specifically said that they were leaving other questions and other contexts, including bathrooms, athletics, and the like for another day.”

“For the Biden administration to try to stretch a Supreme Court decision in this way and attempt to argue that it has some sort of gender ideology mandate is simply false,” she said.

Female athletes will be made to take a back seat to those males who claim to be transgender. Women will lose out on scholarships, funding, awards, titles, and records. Fairness and actual equality are what is at issue in this case, and the innate, biological differences between men and women.