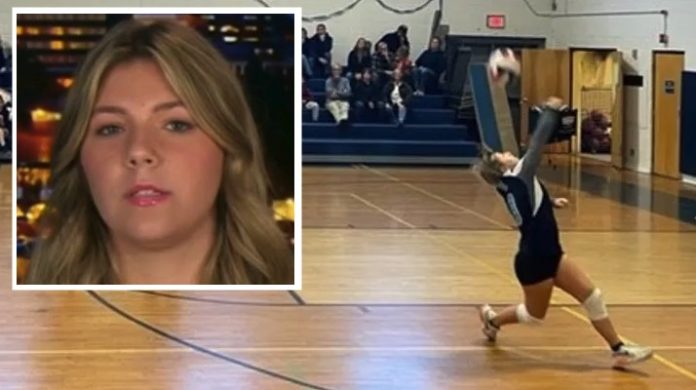 We’re living in crazy times, thanks to liberals.

The same high school is allowing a biological male who identifies as a girl to compete on the girls’ volleyball team.

Allen said, “When the male student entered our locker room, we were changing.”

“Some of us didn’t have a shirt on,” Allen said. “Others of us were only in our underwear.” “Naturally, some of us were uncomfortable and asked the student to leave, but we were ignored,” she concluded.

“I’m a private person when it comes to my body, even in the safety and comfort of home,” Allen explained. “But at school, apparently there’s no problem with a male student freely watching us girls change our clothes.”

“I was taught to respect the privacy of my body,” she continued. “And to speak up if I felt unsafe or if something made me feel uncomfortable.”

Allen confirmed to Fox News that her viewpoint “landed me in trouble with the officials at Randolph Union High School.”

“They reported me to the co-principals, even though the male student didn’t hear me and wasn’t in the class,” she said.

I was upset after the incident and called my mom to tell her about it. She and several other parents called the school administrators to express concerns about the male student being in the girls’ locker room. Not only did school officials make no attempt to provide us with any support or a workable solution, they made me the bad guy for saying that a teenage male shouldn’t be allowed to watch us girls undress.

Shouldn’t every girl be taught to speak out to protect herself from situations where she hasn’t given consent — and be listened to by those in a position to help? If something feels off, trust your gut? Not at my high school. If you don’t comply with the school’s preferred gender identity policy, you’re the bad guy. For expressing true, commonsense, biological facts — boys and girls are different and must respect each other’s bodily privacy — I was punished.

The school began an investigation into the comments I made in class and banned our entire girls’ volleyball team from using the girls’ locker room. The co-principals notified me that I was found guilty of harassment and bullying of “a student on the basis of the targeted student’s gender identity.” As punishment, school officials told me I must take part in a “restorative justice circle” with the equity coordinator, submit a “reflective essay,” and serve out-of-school suspension.