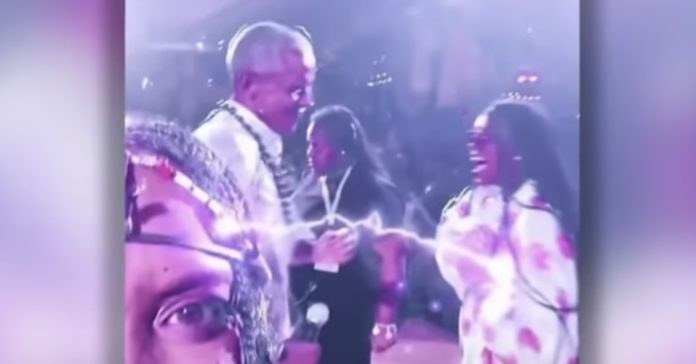 Do you wear your mask the same way that Obama wears his?

Former President Barack Obama has been spotted maskless multiple times over the past week despite new guidance from the CDC and Biden administration.

After Obama appeared maskless in photos at his 60th birthday party, he stuck around Martha’s Vineyard for a celebratory brunch the next day.

The U.K. Daily Mail reported the brunch took place “at a seafront restaurant in Martha’s Vineyard. In a sky blue linen shirt and sunglasses, the birthday boy capped off a weekend packed with parties. He and his guests dined beneath a specially-erected marquee, set beside the water.”

Obama was slammed as a hypocrite amid new guidance from the CDC and Biden administration regarding efforts to end a surge in Covid-19. Piers Morgan and others said Obama is “incredibly reckless.”

Obama quickly changed his birthday plans and only close friends and family were invited. A staff member said there were still approximately 300-400 guests at the “scaled back” birthday event. The guest list indicated that the attendees were not only close friends and family; it was a star-studded event with Beyoncé and Jay-Z, Stephen Colbert, Alicia Keys, Tom Hanks, Dwyane Wade, Oprah Winfrey, and many other. The former president could be seen dancing without a mask on.

The party continues! Barack Obama's 60th celebrations roll into their third day with a birthday brunch at Beach Road restaurant in Vineyard Haven

Surrounded by flowers, the Obama family's guests ate beneath a marquee at Beach Road restaurant on Sunday pic.twitter.com/XFf0dyIFxo

“Apparently, if your last name is Obama you can’t spread COVID. Huh, who knew?” writes Sam J. at Twitchy.

Here’s what a source said about the party via Western Journal:

A source told the Daily Mail that there was “Dom Perignon for everyone, all night,” adding: “It was a sick f***ing party. It wasn’t like a political party. It was a real party.”

And there was plenty of star power during the weekend. Both the aforementioned Alicia Keys and John Legend performed “Happy Birthday” at Saturday’s party. Legend’s wife, social media star and prolific cyberbully Chrissy Teigen, was also in attendance.

Gold napkins, masks and backstage passes were emblazoned with 44X60, a reference to the 44th president’s 60th birthday, and bathroom amenities included antiperspirant wipes, a lint roller and Advil, according to the pictures.

Beckham, who reportedly performed a version of his hit “Birthday B—h” for the prez — who was also sung to by Alicia Keys and John Legend, later posted about the party.

“Had to delete everything due to the rules,” Beckham reportedly explained. “It was epic for sure. If any videos surface it’s going viral. He danced the whole time. Nobody ever seen Obama like this before.”

Rules for thee not for me .

These are the elite that tell everyone to do something while they choose not too.